Why Frida Needs To Be On Your Imaginary Cocktail Party List

It’s Throwback Thursday again, the one day a week we have selected to spend admiring the life and work of an inspirational artist who is no longer alive. Today we honor Frida Kahlo, the beloved Mexican painter who lived from 1907 until 1954.

She was bold, happily strange, and vibrant. Where ever she went, Frida was known for her strong personality. People remember her for the way she eased swear words into casual conversation and told dirty jokes. She was very involved with the communist party, and she frequently smoked, drank too much tequila and sang vulgar songs. Basically, she belongs on everybody’s “10 people, living or dead, that I’d like to invite to a cocktail party” list.

Frida lived a very dramatic life that was full of tragedy and despair, but her artwork remains well loved and her personality still shines through her artwork today. She left an enormous legacy, and her 151 paintings sell for more money than any other female's artwork.

Frida survived polio as a young child, and was called “Peg Leg Frida” by her more obnoxious classmates. Despite this, she was brilliant and performed well in school. By age 16, she was reading and writing in Spanish, English and German. It’s important to remember that this was in the 1920s, and many women were discouraged from having a formal education. Frida’s own mother did not approve of her spending so much time on school, but her father often praised her intelligence, and encouraged her studies.

She never planned on becoming a painter. Her father was a jeweler and an amateur hobby artist, but she wanted to be a doctor. Frida was signed up for medical school at 18 when fate stepped in with a different plan. One September day, the bus she was riding in collided with a trolley car and her life was altered forever. Frida sustained such tremendous injuries that her doctors did not think she would survive.

Frida was often bedridden, not only during her initial recovery, but throughout her life when she had to withstand some 30 surgeries. While she was initially confined to her bed, her father let her borrow his painting supplies. Her mother had a carpenter install an easel that could lay on her bed. They even set up a large mirror by her bedside, so that she could paint her reflection.

Frida found solace in her artwork. She expressed not only her physical pain, but her emotional pain with her paintings. Throughout her turbulent marriage, divorce, and remarriage to famous muralist Diego Rivera, she used painting as a means of sharing the story of her life. If you know how to read them, her paintings tell very dramatic stories. Frida created expressive, emotional, and honest art. Most of her paintings are self portraits. She unflinchingly and fearlessly portrayed herself for who she was. Her paintings include sorrow, infidelity, surgeries, romantic rejection, and hospitalizations. Frida was not one to sugarcoat. She was self expressive, with complete honesty. Some called her Surrealist, but she said she did not paint dreams, she painted her reality.

Frida survived many severe traumas. However, she made the most out of the sharp turns of her fate. She considered them a part of the process of life itself. Frida once wrote in her diary, “My painting carries with it the message of pain” but she also wrote, “Pain, pleasure and death are no more than a process for existence. The revolutionary struggle in this process is a doorway open to intelligence."

I believe that Frida was right. Many people live their lives trying to hide from pain or unexpected trauma, and while that is understandable, it is impossible. Pain will come to you, eventually, no matter how you live. It is within those struggles that you show your strength, your true personality, and your resilience. I have noticed that people who have endured trauma tend to be wiser, more self expressive, and kinder individuals. Pain left them this parting gift. It is the one consolation they are given. 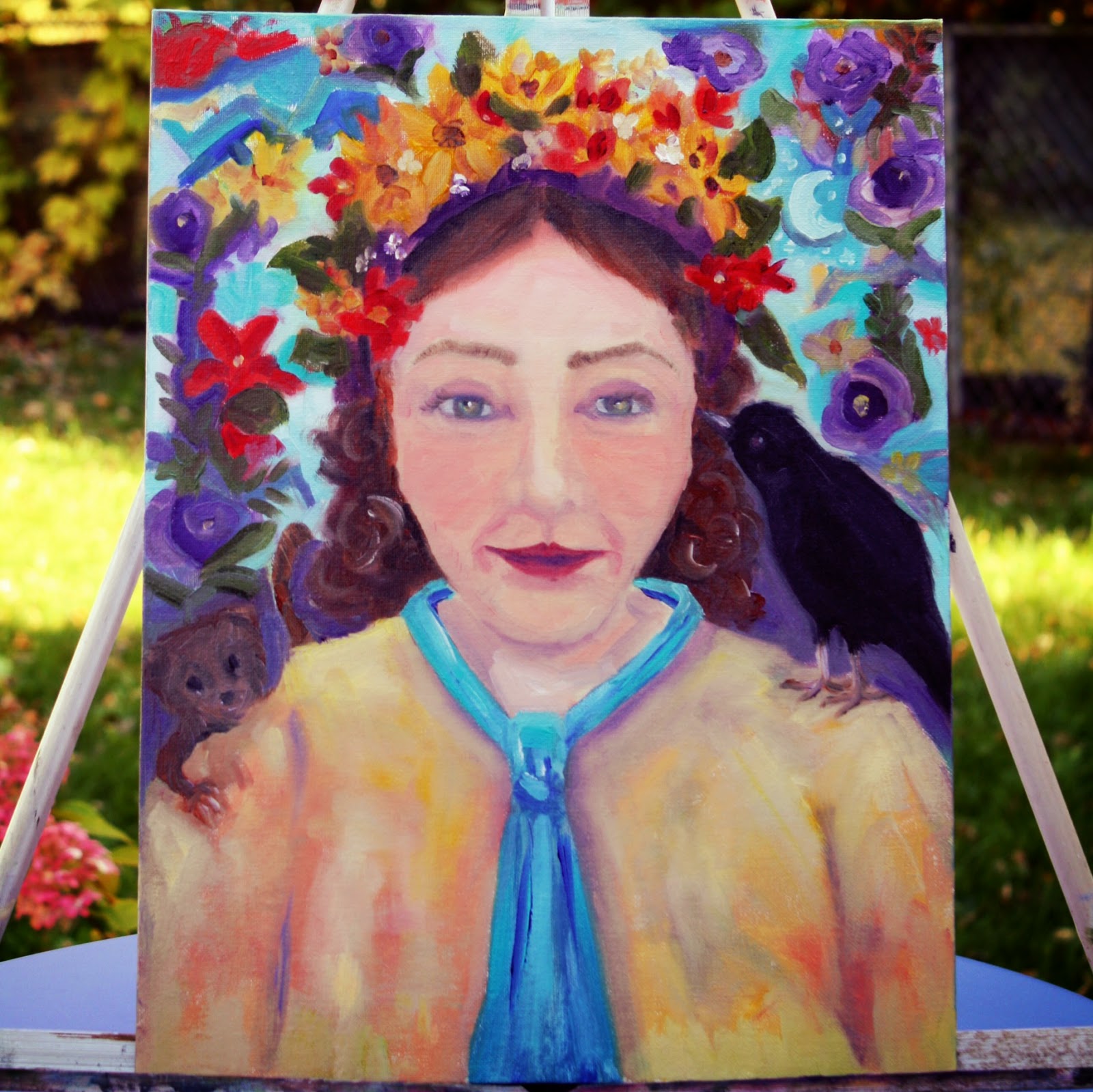 While preparing to write this blog post, I asked my mom if she had any paintings in a similar style to Frida’s unique work. She said she did not, which is not a surprise. Frida had a very singular way of painting. No one paints like her. I encouraged my mom to throw together a painting similar to what Frida might do. She chose to paint me. I love it, it's beautiful. She caught my weird smirk. She also noticed my naturally uneven eyebrows, always ready to look critical. She added a monkey, which is something Frida did in a few of hers. The raven was a cool surprise. I think it should be my facebook profile picture! ;)

Join us later in the week for Sidetrack Saturday.