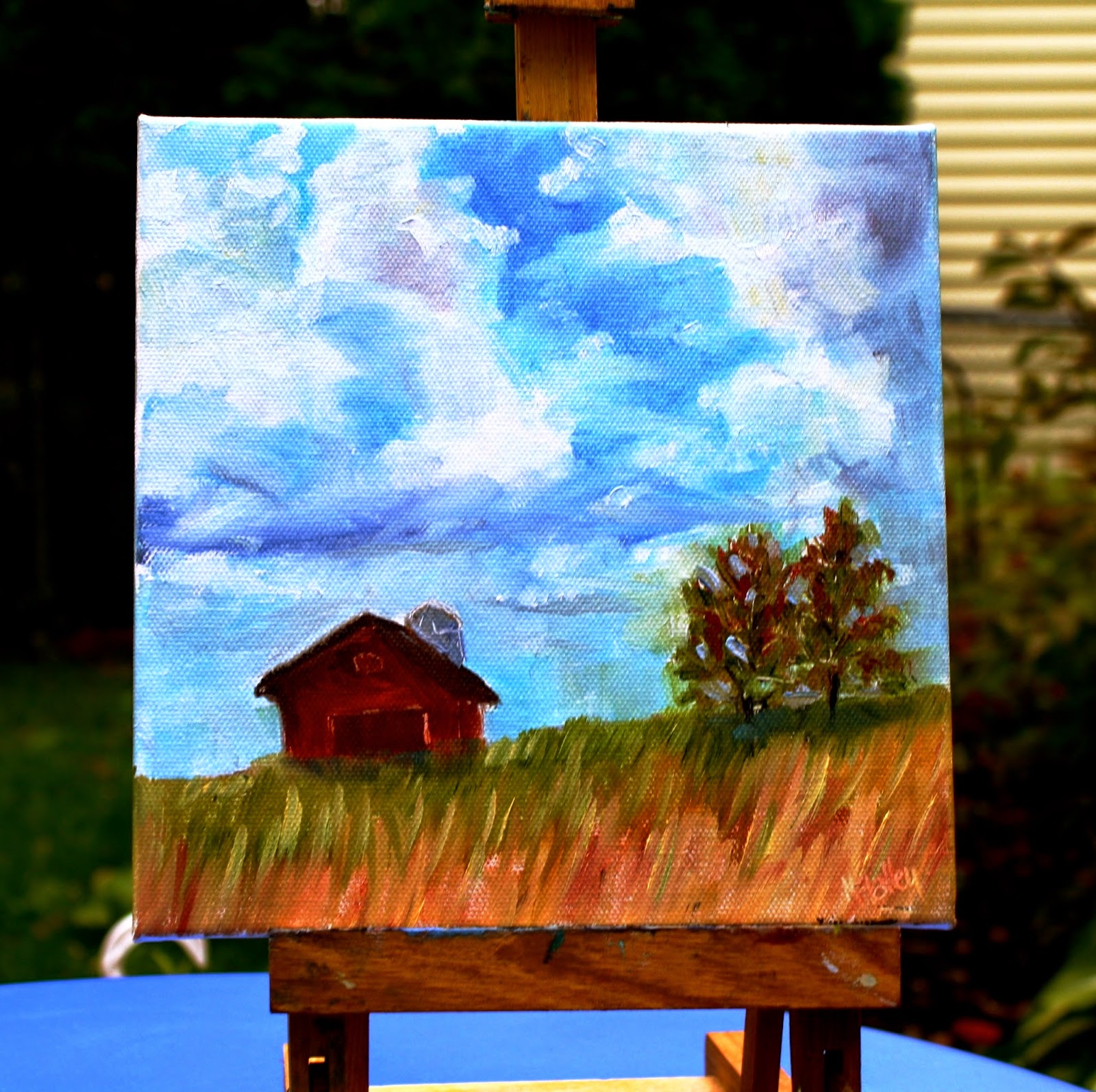 Mom and I are preparing for a trip to New England next week to see family and to catch a glimpse of the famously beautiful Autumn landscape. As a result of this, Sidetrack Saturday will have an Autumn theme tonight. Last week on Daily Paintworks (an art website that my mother belongs to), they challenged their group of painters to create Autumn scenes. They have different challenges weekly on Daily Paintworks, and It’s always fun to see what each of the talented artists decide to make. They are all inevitably unique and interesting. My mother contributed this painting to the challenge.

This is an oil painting of an Autumn scene on a 6 by 6 inch gallery wrapped canvas that she whipped up in one sitting.  It's based off of a photograph that we took while driving about the countryside recently. I enjoy the moody clouds, which are so characteristic of Autumn. I also like the wind swept trees. It has been very windy lately, and so a lot of our trees are already missing a good amount of their leaves. I'd imagine that is a difficult thing to convey in a painting.

I’ve never been a painter, but I can understand that within all creative fields, such as painting, drawing, or writing poetry, it’s important to practice doing work quickly, on a whim, and while using varied styles and subjects. This is why my mother appreciates the weekly challenges from Daily Paintworks. It keeps her well practiced and her styles and themes varied.

For a similar reason, It’s also why I enjoy my workbook for writers, titled  “642 things to write about.” I love that book, because it gives the writer creative prompts to write about subjects that he or she might not normally write about. I've often been perplexed by their prompts, such as "Write a love letter to a person you strongly dislike" and  "How would your life have changed if you had married your first crush?"

As we’re making plans for our trip to New England and the Autumn weather is upon us, I’d like to share one the most beautiful Autumn poems I have ever read. It was written by E. E. Cummings, a poet I have long since loved. He was from Cambridge Massachusetts, which is a lovely town that I had the pleasure to reside in for a while not too long ago. Here it is:

And yes, that is how it should be formatted. If you’re not used to his style, an E. E. Cummings poem could seem confusing. Don’t panic! If you look closely, you will see that there are only four words within the poem. If you turn it horizontally, it is easier to read (although this lessens the impact of the poem).

Now it is easy to pick out the four words: Loneliness, a, leaf, falls. However, you can see why it is important for the poem to be displayed vertically. As you read the letters, your eyes follow the pattern of a leaf seeming to fall down the page.

It’s also important to note the feeling of solitude within this short poem. Obviously the presence of the word “loneliness” would make you assume that, but it goes deeper. The lowercase l in loneliness is separated from the rest of the word, which means it looks rather like a number 1. Indeed, one letter being separated from the rest of the word adds to the feeling of loneliness and everyone knows that 1 is the loneliest number. In addition, I’d like to mention that the rest of the separated word spells “oneliness.” Even though that’s not technically a word, it was a cool choice! Cummings was known for making up words, and you can interpret ‘oneliness’ to mean anything you’d like. However, to me, it denotes ‘being one’ or solitary.

While watching Autumn leaves fall, people are naturally reminded of the solitude that occurs in the coming winter, and of our own mortality. The symbolism of the seasons was very important to Cummings in particular. He wrote many amazing poems praising Spring as a beautiful, magical rebirth. Therefore, he saw Autumn as the opposite to the life of Spring. He is hardly alone in seeing the coming winter as a solemn event. Anyone who lives in the north inevitably finds themselves living their life very in tune with the cycle of the seasons.

As we plan our trip for next week, the coming winter is on our mind, too. This will probably be our last road trip before the snow takes over our lives for months. I’m not being melodramatic, Erie gets a hell of a lot of snow. We’re going to enjoy the pleasant weather while we can.