Happy Halloween! It’s Throwback Thursday and we're going way back to the 1800s! Tonight I decided to write about Henry Wadsworth Longfellow. Longfellow was born in Portland, Maine in 1807. He quickly showed a passion for writing in his youth, even though his father wanted him to go into law. After college, Longfellow spent three years traveling throughout Europe. While he was traveling he was not idle, but mastered seven different languages and absorbed as much as he could about literature in the countries he visited.

Throughout his life he traveled often. Longfellow eventually settled in Cambridge, Massachusetts, and taught Modern Languages at Harvard University. He became wildly successful and famous during his life, which is a rarity for poets. He was well loved, not only for his poetry, his passion for travel and linguistics, but also for his romantic personality. He died at 75 years old in Cambridge, Massachusetts. 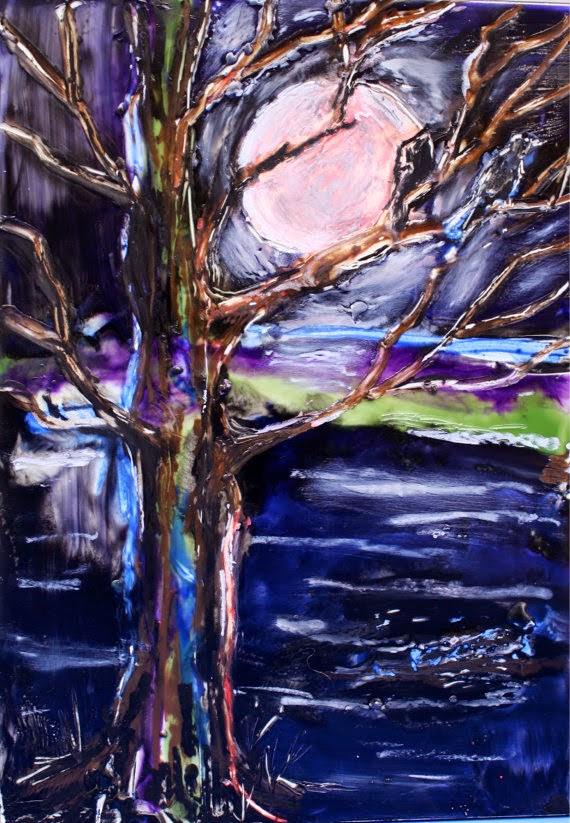 Being from New England, you can bet Longfellow wrote some good Autumn poems. Who else loves Halloween? No, no... I mean seriously loves Halloween. I do! It’s my favorite holiday. Because I am so excited for Halloween, I decided that I also wanted to write about this encaustic painting my mom did a while back. I think it’s a perfect painting to share so close to October 31st.

I love the barren tree sitting in front of a bright full moon, just obscuring your view. The dark background with streaks of purple, silver, green, and blue, looks as if it’s dripping off of the board she painted it on. The texture of the encaustic wax certainly adds to the painting. Touching the wax, you can almost feel the chill of a misty night. Ooo, I think she should do more creepy paintings like this one!

A great poem  to share with this painting would be “Haunted Houses” by Henry Wadsworth Longfellow. Enjoy, and have a happy Halloween tomorrow! I’ll be back on Saturday.

All houses wherein men have lived and died
Are haunted houses.  Through the open doors
The harmless phantoms on their errands glide,
With feet that make no sound upon the floors.
We meet them at the doorway, on the stair,
Along the passages they come and go,
Impalpable impressions on the air,
A sense of something moving to and fro.
There are more guests at table, than the hosts
Invited; the illuminated hall
Is thronged with quiet, inoffensive ghosts,
As silent as the pictures on the wall.
The stranger at my fireside cannot see
The forms I see, nor hear the sounds I hear;
He but perceives what is; while unto me
All that has been is visible and clear.
We have no title-deeds to house or lands;
Owners and occupants of earlier dates
From graves forgotten stretch their dusty hands,
And hold in mortmain still their old estates.
The spirit-world around this world of sense
Floats like an atmosphere, and everywhere
Wafts through these earthly mists and vapors dense
A vital breath of more ethereal air.
Our little lives are kept in equipoise
By opposite attractions and desires;
The struggle of the instinct that enjoys,
And the more noble instinct that aspires.
These perturbations, this perpetual jar
Of earthly wants and aspirations high,
Come from the influence of an unseen star,
An undiscovered planet in our sky.
And as the moon from some dark gate of cloud
Throws o'er the sea a floating bridge of light,
Across whose trembling planks our fancies crowd
Into the realm of mystery and night,--
So from the world of spirits there descends
A bridge of light, connecting it with this,
O'er whose unsteady floor, that sways and bends,
Wander our thoughts above the dark abyss.